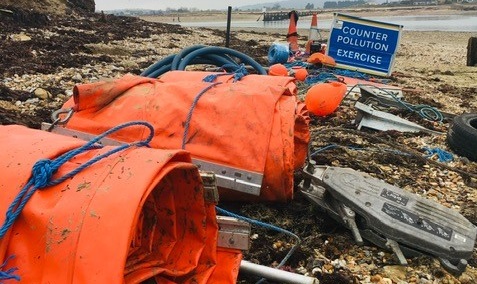 On 14-15th November 2018, the Health, Safety and Environment Coordinator from Colas Portsmouth PFI attended the two day Maritime and Coastguard Agency (MCA) run Beach Supervisor Course at Bembridge on the Isle of Wight.

The course gives delegates an awareness of how to respond in the event of an oil pollution incident in the marine environment. Oil pollution incidents at sea are more common than people think with an estimated 7000 tonnes of oil spilt in 2017. As Portsmouth is a coastal city and the UK has around 12,500 km of coastline, having an appreciation of what to do during a major pollution incident is very important.

The first day focused on the theory behind oil pollution including the role the MCA play, the fate of different types of oil in the sea and the methods used to collect, transport and dispose of spilt oil. The second day put these methods to practice by carrying out beach surveys to assess the situation as a first responder to an oil spill incident, how to deploy booms to collect the oil and how to use various pieces of equipment to remove spilt oil and store for disposal.

The course was extremely useful and informative and could allow Colas to assist should a pollution incident occur.